Agafia Proves the Art of survival: Not the usual last day on earth survival hack. 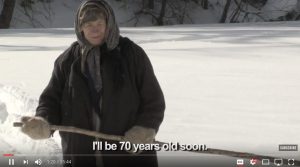 We have heard a lot about stories of survival. But nothing like an old believer, the story of Agafia, isolated from the world and surviving the teachings of old believers.  While young generation today are exposed to survival games and searching for last day on earth survival hacks to get through the game, Agafia is surviving her own game in the wilderness.

I found her story in a documentary titled Agafia – Hermit Surviving Russian Wilderness for 70 years. It is a 53 minute documentary about Agafia and his art of survival skills in the wilderness of Russia. It is quite intriguing that there are still people known as the ‘Old Believers’ who fled the Russian rule of Nikov when he introduced radical religious reforms. They moved to the most remote places of Russia to avoid prosecution from Nikov followers.

Geologists first found the Lykov family in 1970’s. Now at 72 years of age, Agafia is living alone in the Siberian wilderness. She does all manual labor by herself – from hunting, fishing, chopping woods, carrying water, setting fire, and even doing some needle work. Agafia, at her age, is still able to do all these manual labor. But her old age wears her down and that she needs help to do all these labor. A man should be nice in her homestead but there’s no evidence that she had been ever married.

In 2014, Agafia wrote a letter to her fellow believers, asking for help as she is growing old and that she may no longer be able to do all the manual labor in her homestead. In 2016, she was flown to the nearest hospital due to leg injury. Right after recuperating, she requested to be flown back to the wilderness.

Though born a woman, Agafia is well learned from her father with manual labor. Her skills of manual labor and her faith in old Christian teachings are so strong which are perhaps key to her long life. Though aged and showing some signs of illness, Agafia is able to survive the wilderness on her own. Her pets, cat, dog, goat, and chickens are keeping her company.

Surviving in the Siberian Wilderness for 70 Years (Full Length)